In recent years Zambia has been unable to meet growing demand for electricity, and this combined with recent poor rainfall has led to severe shortages and had a negative impact on economic development.

The Mwambwa Hydropower and Solar PV Project will bring two different but complementary generation technologies to bear in support of the Government of Zambia’s policy of increasing installed capacity in the country.  The Government’s aim is to eliminate the power deficit, support increased economic growth and access to electricity, and potentially provide a source of export earnings.

The Mwambwa River is located close to the town of Chinsali in the north-east of the country, approximately 500 miles from Lusaka.  eleQtra and its local partner are developing a hydroelectric scheme on this river, and also pursuing the development of a solar PV facility in a location nearby.  The solar facility will have the potential for up to 20MW installed capacity, as a complement to the expected 75MW installed capacity of the hydropower element of the project. 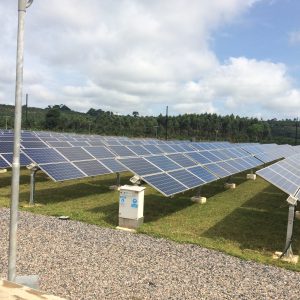 As the capital of the newly-created Muchinga Province, Chinsali is earmarked by the Government as a regional hub for economic development and for power generation and transmission.  The project will therefore be situated in an area with growing needs in addition to its existing unmet electricity demand, and furthermore its location places it close to the planned interconnection with Tanzania that will connect Zambia to the East Africa Power Pool (EAPP) as a complement to its existing connection with the Southern Africa Power Pool (SAPP).

The Ngonye Falls Hydroelectric Project is a 180MW run-of-river scheme in the Western Province of Zambia, which is under development by the project SPV Western Power Company (WPC).

The Mwambwa River Hydropower Project will support the Government of Zambia’s policy of increasing installed capacity in the country in order to eliminate the power deficit.

Up to 75MW of hydropower generation on the Mwambwa River, Zambia
Up to 20MW of solar PV generation at a nearby location.
Overall project costs estimated to be c. $250m.